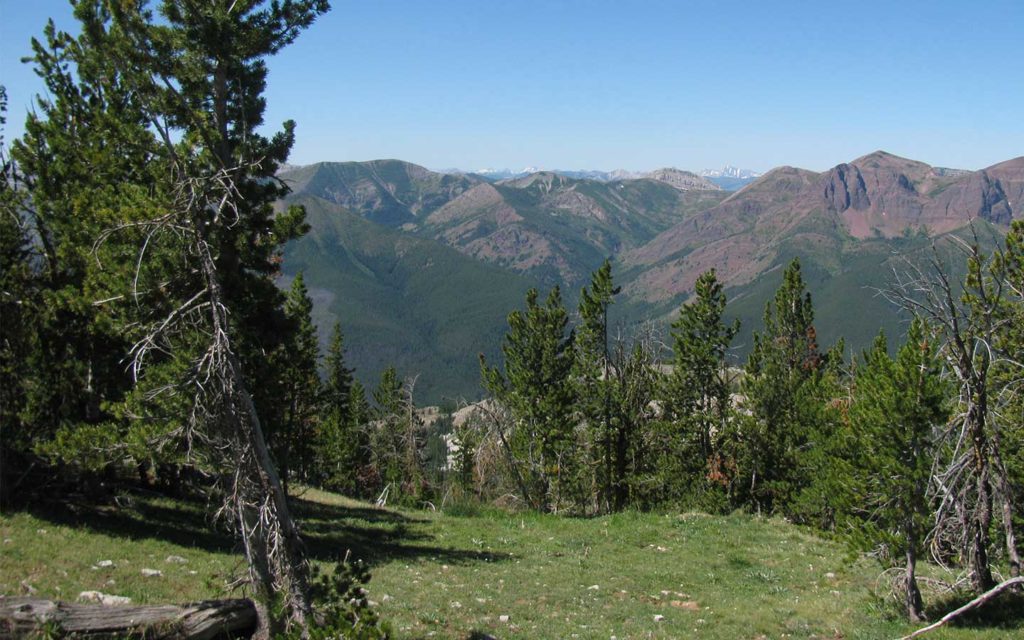 Contrary to popular belief, not all Montana is wild. We have private property. Years ago I interviewed a Russian diplomat who was shocked to see a small city when he landed in Missoula; he thought he’d be seeing wolves. He’d heard of Glacier National Park and Yellowstone National Park. He’d heard of big expanses of forest and thought it was all public (it’s not.) He’d heard of Indian reservations and thought all Native American land was public, too. (It’s not.)

There is a huge amount of public land in Montana — Forest Service, Bureau of Land Management, and State-owned land and while it’s legal to trespass across much of it on foot, that doesn’t mean you can ride your horse anywhere you like. As with almost everything else, you’ll have to share the path: with hikers, other riders, mountain bikers, snowmobiles, all-terrain vehicles, and trucks.

Trail use in Montana is a privilege, not a right. People such as the Backcountry Horsemen volunteers have fought endless political battles to keep trails open to public use. None of it’s free and all of it requires respect and care from its users. Hikers have rules to protect the trail. Horse riders have the same and more.

Located in the Custer and Gallatin National Forests between Billings and Yellowstone National Park
Designated in 1978, this 920,343-acre wilderness consists of two major mountain ranges: the Beartooths which are rugged, glaciated, granite with huge alpine plateaus, and the Absarokas which are gentler mountains with grassy meadows and forested canyons. This is the largest continuous landmass above 10,000 feet in the United States.

The Beartooth Range contains 29 peaks above 12,000 feet including the highest point in Montana, 12,799-foot Granite Peak. There is an abundance of water in the wilderness with nearly 1,000 lakes, 300-foot waterfalls plummeting to cirque lakes, countless cascades and rushing creeks and rivers. It is a key part of the Greater Yellowstone Ecosystem with habitat for grizzly and black bears, bighorn sheep, elk, moose, mountain lion, pronghorn, bison, lynx and marten.

Located in the Beaverhead-Deerlodge and Bitterroot National Forests southwest of Butte
With the exception of some stream valleys, most of these 158,615 acres are above 7,000 feet. The East Fork of the Bitterroot River is at 5,400 feet while West Goat Peak is at 10,793 feet. The Anaconda-Pintler country has old-growth forest, windswept ridges, alpine meadows and rugged alpine peaks along the Continental Divide. Lakes and U-shaped canyons reveal past glaciation. There are cirques with alpine lakes and glacial moraines which make for spectacular scenery. Some of the world’s finest trout streams, including Rock Creek and the Big Hole River originate here. A dozen species of conifers thrive on the North Slope; the south slope, drained by the Big Hole River, is mostly lodgepole pine with spruce-fir on the wet canyon bottoms.

Located in the Flathead and Lewis and Clark National Forests west of Choteau
At 1,063,503 acres, the “Bob,” as this wilderness is known, is the most ecologically complete mountain wilderness in the country. Rugged peaks, big river valleys, lakes, large meadows and extensive coniferous forests characterize this area. The most remote reaches of the Bob are along the Continental Divide, the center of which is the Chinese Wall, an imposing limestone precipice towering 1,000 feet for 13 miles. Moist pacific maritime weather on the west side results in lush, diverse forests. But this changes dramatically to drier, more open country to the east. There are more than 100 lakes in the wilderness and many major streams have their beginning there including the blue ribbon South Fork of the Flathead. The Bob is the last great stronghold of the silvertip grizzly and is home to every species of mammal indigenous to the Northern Rockies except for Plains Bison.

Located in the Kootenai National Forest southwest of Libby
Not as big as the “Bob”, the 94,272 acres of the Cabinet Mountain Wilderness are every bit as wild. The range runs north-to-south and is covered by snowcapped peaks, streams, and waterfall. Because it’s on the west side of the state catching Pacific moisture, parts of the Wilderness receive over 100 inches of precipitation annually, resulting in thick lowland forests of Western Red Cedar, Douglas fir, Western White pine, Western Hemlock and other conifers. While not a high-elevation range, the peaks are sharp with sheer walls that plunge 1,000 feet into deep valleys. There are more than 80 lakes in the wilderness. The high point is Snowshoe Peak at 8,712 feet which is high above the wet meadows, hanging valleys and open stream bottoms. Wildlife is abundant and typical of the Northern Rockies. There may be a few grizzlies left but the population is in serious trouble.

Gates of the Mountains Wilderness

Located in the Helena National Forest north of Helena
Montana’s smallest wilderness area (28,562 acres) is a horse-rider’s dream with ponderosa pine and Douglas fir growing in open parks and gentle meadows. The Wilderness gets its name from the immense limestone cliffs along the Missouri River that threatened to block Lewis and Clark’s journey, when suddenly the river twisted through a narrow “Gates of the Mountains” canyon. Designated in 1964, it is a place where the wild limestone formations have been weathered into spires, sheer cliffs, outcrops, and walls with shallow caves.  Spring is the best time to ride in the area because it is arid and some of the streams and springs disappear in the summer.

The 286,700 acres of the Great Bear encompasses the entire upper drainage of the Middle Fork Flathead River from the Continental Divide west to the Flathead Range and is a crucial link between the Bob and Glacier Park. Senator Lee Metcalf is to thank for preserving this bridge for the free-roaming grizzly. Knife-edge ridges along the divide drop to heavily forested mountainsides then to gently sloping meadows and finally to open river bottoms where most of the trails are.

Located in the Beaverhead-Deerlodge and Gallatin National Forests southwest of Bozeman
Designated in 1983, these 254,288 acres consist of spectacular alpine peaks, high sparkling lakes, U-shaped valleys, meadows and deep canyons. Elevations range from 4,500 feet in the canyon country along the Madison to 11,015 feet atop Gallatin Peak or 11,316 feet atop Hilgard Peak. This area is an important component of the Greater Yellowstone Ecosystem and is crucial grizzly habitat. Lodgepole pines grow beneath craggy peaks and subalpine lakes.

Located between Sidney and Plentywood managed by the U.S. Fish and Wildlife Service and is within Medicine Lake National Wildlife Refuge
Designated in 1976, this Wilderness preserves a portion of northeastern Montana’s marsh–filled prairie and consists of a shallow lake and sand hills within a national wildlife refuge. Medicine Lake is the flattest and lowest of Montana’s designated wilderness areas with a high point of 2,025 feet. It’s a transition area between the short-grass prairie and the tall-grass prairie. The distinctive rolling dunes of the Sand Hills are mantled with a blend of mixed prairie grasses, Chokecherry and Buffalo Berry. It is a way station for hundreds of thousands of birds during spring and fall migrations and supports a large nesting colony of White Pelicans. This is a prairie-pothole wilderness existing as a haven for wildlife.

Located next to the Mission Mountains Wilderness on the Flathead Reservation southeast of Polson
Established in 1982 by the Confederated Salish and Kootenai Tribes, these 89,500 acres consist of privately owned tribal lands along the western slopes of the Mission Mountains that were designated as wilderness, the first such wildland dedication by any tribe on its own. These mountains have an abundance of water from perpetual snowfields that feed one of the densest concentrations of alpine lakes in the northern Rockies. Waterfalls, creeks and streams are plentiful. The tribes’ management demonstrates their cultural and spiritual links to wilderness with a priority on wildlife.

Located in the Lolo National Forest only four miles north of Missoula
The Rattlesnake’s 32,976 acres are a popular get-away for Missoula residents and a link to the wilderness areas to the north. There are many lake-filled basins in sloping forests and secluded hanging valleys with waterfalls and steep-gradient streams. Timberline conifers drop into subalpine spruce-fir forests, then down to open parks with Douglas fir and ponderosa pine. Western larch and lodgepole pine are also abundant. The U-shaped Rattlesnake basin is fed by more than 50 small creeks that begin as seeps from springs and melting snow banks in the upper portion of the wilderness. The trails in the south end are used frequently.

Located in the wide-open Centennial Valley Southeast of Dillon and within the Red Rock Lakes National Wildlife Refuge
Managed by the U.S. Fish and Wildlife Service, the 32,350 acres in the Centennial Vallery are a remote, virtually undeveloped basin which holds an amazing system of waterways consisting of lakes and connected marshes that is managed for wildlife. More than 14,000 acres of wetlands provide habitat and solitude for a stunning array of birds and other wildlife. The wilderness comprises about 80 percent of a refuge that was established in 1935 to safeguard the rare trumpeter swan. Some 215 bird species have been observed within this wetlands wilderness. Red Rock’s high prairies and mountains combine with the water to create a habitat for moose, elk, deer and antelope.

Located in the Helena, Lewis and Clark and Lolo National Forests southeast of Augusta
South of the Bob and east of the Missions, the 259,966 acres of the Scapegoat Wilderness gets its name from its highest point, the massive 9,202-foot Scapegoat Mountain. There are awesome 1,000-foot limestone cliffs that stretch nearly four miles on the east face. Scattered subalpine forests of spruce, white bark pine and fir open onto grassy parks and gently sloping meadows. The Scapegoat plateaus have great views of the Continental Divide.

Located in the Bitterroot, Clearwater, Nezperce, and Lolo National Forests west of Hamilton
The 251,443-acre Selway-Bitterroot straddles the Montana-Idaho border with areas located in each state. The Bitterroot Range is classically rugged and glacier-sculptured dropping off to deep canyons with sheer walls, cliffs, and tumbling waterfalls. A rough landscape of rugged granite peaks that is treeless and austere moves to forested ridges, hanging valleys and heavily forested valleys with surprising pockets of bogs and marshes. The area is tremendously diverse and includes low valleys with old-growth stands of Western Red Cedar, Giant Fir, Douglas fir, and Western Larch. Elk, moose, mountain goat, black bear, wolverine and pine marten thrive in healthy numbers.

Located between Lewistown and Glasgow
Designated in 1976, the 20,819 acre UL Bend Wilderness is overseen by the U.S. Fish and Wildlife Service. It is scattered among four unconnected blocks within the Charles M. Russell National Wildlife Refuge located on a peninsula formed by a great bend in the Missouri River. The wilderness consists of short prairie grasses, sagebrush and greasewood on the gently rolling interior with ponderosa pine and juniper in the coulees that drop to the shores of Fort Peck Lake. Horseback riding is allowed in the refuge, but there are usually special seasonal regulations and you will need to plan how to access water.

Located in the Lolo National Forest southeast of Missoula
The Welcome Creek area is a rare example of lower-elevation general forest as wilderness with wet bottoms and park-like ridges. It is 28, 135 acres of steep rough breaks covered with old-growth stands of lodgepole pine, Douglas fir and spruce. The highest point is Welcome Mountain at 7,723 feet and the east is bounded by Rock Creek, a famous blue-ribbon trout steam. It is an important summer-range area for elk.

Check out pictures from the Bob Marshall Wilderness Area taken by Ron and Debbie Ries, Bob Hermance, Steve Hutton and R. Fred Fitzpatrick on their ride from September 5, 2009, to September 12, 2009.